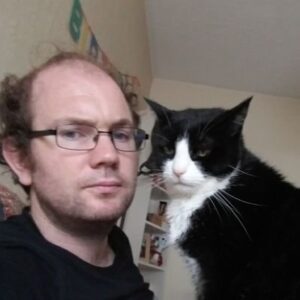 Aidan is a comedy writer based in Dublin

“A man clearly very much at home with the absurd” – Nomoreworkhorse

Aidan is a writer for radio, stage, and screen.

He wrote ARACHNOPHILIA (“…shows a deftness and charm that’s often beguiling in this delightfully absurdist comedy…”- The Arts Review) which featured at the Dublin Fringe Festival 2018 and ran again in 2019. He also wrote and directed FUNDRAISING: THE MUSICAL in 2018.

Aidan also writes and performs sketches online, most notably political satire, and his sketches have notched up well over 1 million views.

In addition to his comedy writing, Aidan also specialises in informal STEAM-education and communication for both adults and children. He is available as a script editor for sci-comm materials if you feel your scripts need to be simplified and stuffed full of comic zest.

If you would like to get in touch with Aidan or request any of his scripts you can reach him at aidanjfitzmaurice@hotmail.com

Leo Varadkar called to my door canvassing and I managed to get it on video. pic.twitter.com/SsUgG8Wqw4

That weird Tesco ad with the guy cooking to tapes of his dead mam but the tapes are Aoife McGregor instead. pic.twitter.com/24NuifcY3y

I made a handy explainer video to bring us all up to speed on the Katherine Zappone/Leo Varadkar/everybody scandal that is currently engulfing Irish politics.

There’s just something about this guy that tells me he’s a bit of a snake.

A video about a screening of Jurassic Park with live sound effects.